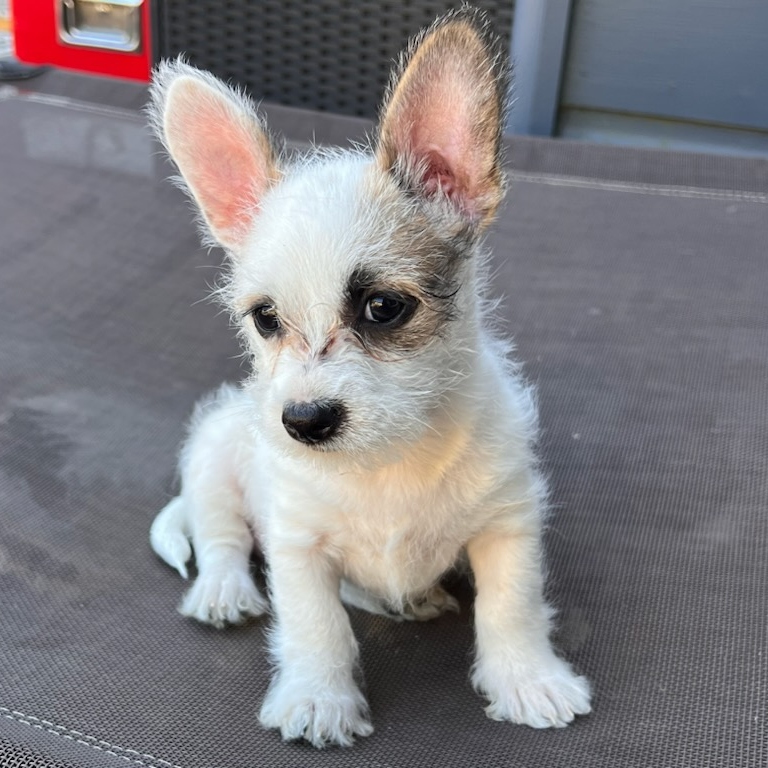 On June 17, 2022 we welcomed a small poodle mix named Cypress from El Paso Animal Services. Upon exam at our vet, it was discovered that Cypress was carrying 4-6 puppies and was too far along to be spayed. Going into labor on July 12, 2022, Cypress’ little Sprouts had a dramatic entrance to life, ultimately requiring an emergency c-section to deliver 4 healthy puppies. Leyland, Yew, Baker & Gowan, named after types of Cypress trees, will be ready for adoption once they are 12 weeks old on Oct. 4th, along with their mama. The entire Cypress Grove were together in a foster home taking them through Puppy Culture until the litter was 8 weeks old, when they were moved to another foster home all together for the remaining 4 weeks.

Dogs: In foster with other dogs (siblings as well as resident dogs)

In a Nutshell: Gowen? Go*now* is this puppy’s motto — enough to earn her the nickname Gogo. The Sprouts runt and last one out via emergency c-section, it almost seems like Gowan’s been making up for it ever since. Beginning as the most cautious and watchful/observant of the puppies, she quickly grew into the bravest, most confident, most playful, and most old-soul. Her mama and siblings seemed to pick on her a bit and she’s better prepared because of it; easily the smartest and most most well adjusted of incredibly well-adjusted puppies. Always the first to try new things and leader of the Sprouts, Gowan looks the least and acts the most like her mama Cypress, often choosing to be with the adult dogs and humans in her foster home when her siblings are sleeping. A lover of toys, chewies, puzzles, games, figuring new things out, and being with her humans, Gowan would thrive in any home willing to challenge her intelligence in positive ways.